Steve Miller Band, after 17 years of studio silence, released Bingo! last Tuesday. It's a covers album, but why, after all these years go back in to a studio? Greatest Hits 1974–78 is one of the best-selling albums of all time, and the band tours to sold-out stadiums regularly...it isn't a money grab. Historically, this "cover album" thing is a sign of growing old. Aerosmith's last album was also covers (Honkin' on Bobo), Bob Dylan did some Christmas songs, and The Who have been planning a blues homage project for a few years. And, who could forget David Lee Roth's Strummin' with the Devil. Perhaps this is an Advanced move.

"Abracadabra" is Steve Miller's last real single. Who would have thought the 70s rocker would make a cutting-edge video in the 80s. This is what all bands of the proto-video era should strive to have--one memorable video to push them into a new decade. 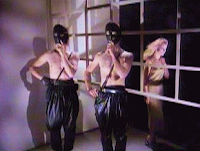 One would think "Abracadabra" would inspire magic show tricks, rabbits pulled out of hats, saw tricks and the like. But, there's very little other than spontaneous fireballs, I must say. There's a witch... I guess that's magic (in the Merlin kind of vein).

There's not a whole lot here to dissect, but for the early 1980s this is a great special effects tour-de-force. And yes, there are leopard print headbands.One thing I like is that the chick is still hot by today's standards. That's somewhat rare for a video that was made in the fashion-turbulent 80s.

Peter Conn, the director, also did "Atomic Dog" for George Clinton, which is cool.

To submit retrospective article ideas, or just to discuss the obscure, contact me here.

[All contents are Copyright © their respective owners.]