Annually StevePrutz.com reviews some pop culture and ranks a best in categories like film, music and television. This year is expanded to include critiques. This.... is.... 2008!

Last year was rich with artistic and unique music videos, many by new contestants. But in 2008, the perennial favorites have come back. With the launch of mtvmusic.com, there is a sense of nostalgia in the air. Old bands that make good video art are back for one more round. And, it seems that Grindhouse is more inspirational than critics originally thought! No Rickrolls here! 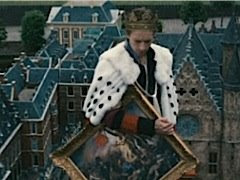 Coldplay: "Viva la Vida" (Version 2) [dir. Anton Corbijn]
If you don't know already, this is a tribute to the original video of Depeche Mode's "Enjoy the Silence", a concept that that band hated. But, Corbijn's idea of a "king who is looking for a quiet place to sit" was brilliant. Instead of a beach chair this time around, the King is toting a painting and a sad expression.
Killer scene: Now he's got a boombox??? (1:53)
Yawn moment: I don't want to see the band ooh-ing the outro. (3:53)

Beck: "Youthless" [dir. Kris Moyes]
This music video shows that there are about 100 ways to depict Beck Hansen's head using art. We get stop-motion animation of stuff that looks like it came from the Neverending Story or Nightmare Before Christmas. All interesting.
Killer scene: Leatherface Beck! (2:08)
Yawn moment: That ghost looks nothing like him! (2:11)

Santogold: "LES Artistes" [dir. Nima Nourizadeh]
This is some surreal blood and guts. Basically this is all the violence an American could hope for, with no real bloodshed. The opening shot of the video (pictured) is just marvelous.
Killer scene: Stomping the melon-head (2:06)
Yawn moment: Stop crying that you're wet! More violence! (2:37)

MGMT: "Time to Pretend" [dir. Ray Tintori]
Every new band should wish for a video like this: something that perfectly describes their sound and theme. The special effects here are cheap, but do their job. Psychedelic!
Killer scene: The zebra feast. (1:33)
Yawn moment: Does the dolphin explosion really need to be in this vid? (3:40)

Metallica: "All Nightmare Long" [dir. Roboshobo]
Twelve years after their last notable video, the old guard of speed metal return with a Soviet-zombie documentary. In metal, there are lots of music videos that try to mix horror and cool imagery with a song, but only Metallica has the budget to pull it off right.

The band is missing from the set (thank god) and replaced by a Russian scientist recalling the (oft-discussed-in-paranormal-circles) Tunguska event in Siberia. In this alternate history, it seems the Soviets have found something that could help them destroy capitalism once and for all. Animation and live action both help the plot. There's also this excerpt about chemtrails from a man in Stamps, Arkansas, which is pointless but intriguing.
Killer scene: at the crescendo of the song, the Commie robots appear! (7:08)
Yawn moment: the bad cat CGI (3:12)


****HONORABLE MENTIONS****
Bjork: "Wanderlust" [dir. Encyclopedia Pictura]
This took 9 months of post-production to get the special effects just right. The water is cool, but I wouldn't ride a buffalo down it with a haunted backpack.

Yeasayer: "Wait for the Summer" [dir. Mixtape Club]
The effects are super, but why such an obsession with the apple?

The Blizzards: "The Reason" [dir. Chris Sayer and Jason Arber]
Reminiscent of the effects of Muse's "Invincible", the story is about a 90-ft-tall female monster babe and the man who can't take his eyes off her.

ANJ: "Gorbachov" [dir. Tom Stern]
This international entry comes from Mother Russia (and it took me a few viewings to realize it was sung in English). But, the song is secondary to the video, which depicts buxom babes being attacked by undead communists! The protagonist, a shirtless, axe-wielding Mikhail Gorbachev runs in to save the day, just like in real life!

Email ThisBlogThis!Share to TwitterShare to FacebookShare to Pinterest
Labels: best of the year 2008
Newer Posts Home
Subscribe to: Posts (Atom)