Young persons may not remember the Green Day days before American Idiot. 1994's Dookie was an absolute pop-punk masterpiece (the word "punk" is used in a liberal sense here). It sold over 15 million, and spawned some pretty rad trends. The followup album (Insomniac) was just as good. And so was the next (Nimrod). This year's 21st Century Breakdown is poised to be another notch in the band's belt (they've kept the goth/emo/whatever-this-decade-calls-it look). Sometimes a history lesson can show you just how good a band was, is, and will be--and here we go. 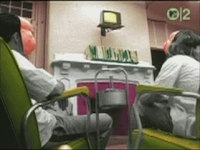 This is the song and the video that launched the San Fran trio into the rock heavens. Anyone else remember when MTV used to countdown the 100 best videos of the year on New Year's Eve? I doubt they still do it anymore (or they only play clips or something lame), but this was the video of the year in '94. I almost lost my mind when I first saw Tre Cool on those duct taped drums just killing it. Mark Kohr kinda became the de facto GD director after this, probably from this one's massive success. 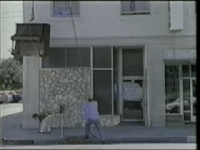 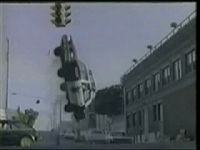 Oh, these lovable scamps. Walking around like the Mr. Magoo with no cares in the universe. Maybe the best part (apart from the cop car flying through the air and hitting a traffic light) is Tre Cool's smirk when he finds some money right under the precariously lifting piano. A nice little two minute anthem from Insomniac. 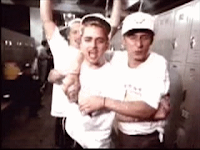 Straight out of an NFL Films daydream! The basic plot is the band wants to perform a concert, much like executing a drive to the end zone. Two great moments are when Tre Cool mouths "Hi, Mom!" into the camera like a primetime rookie, and when Billie Joe checks his setlist like he's a QB. Just brilliant ideas here.