Because this San Fransisco band just recently announced reformation (and performed live), I decided to quickly cover Faith No More's best three videos in one quick shot. We have, of course "Epic"; and then the lesser known "Everything's Ruined" and "Last Cup of Sorrow" from their career's prime and twilight, respectively.

In 1990, Faith No More's "Epic" put them on the rock 'n roll map. The band seemed poised to overcome the "hair metal hangover" with an innovative rap-rock design--they might have been the Nirvana of the 1990s, if grunge hadn't come around (I'm not placing blame at all).

1989
Dir: Ralph Ziman
The video is simply a sound stage performance with a rain machine, intermixed with kooky visuals and special effects. Mike Patton's head explodes, Jim Martin's guitar is struck by lightning, a piano is blown to bits... pretty cool. I am obligated to write about the fish (or Bjork's fish, whatever), that provoked outrage for its flopping footage. Silly. 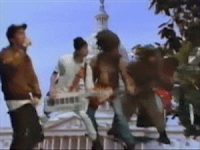 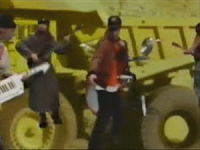 1992
Dir: Kevin Kerslake
More interesting is the video for "Everything's Ruined". It's one of those stock footage montage clips that are so common. But this one is so odd that it's worth noting. This one pits the band against the green screen, fighting and swimming with the clips. It's fun to watch them in their element.

1997
Dir: Joseph Kahn
Even more interesting is "Last Cup of Sorrow". I saw this vid before I knew of Hitchcock's Vertigo, and I became obsessed with both. Some of the shots are almost perfect replicas of the 1958 thriller. Despite the original film's seriousness, FNM throw in some humor by adding prostitution and cross-dressing (you'll see). I had no idea Album of the Year existed when I first saw this... such an underrated record.

"Falling to Pieces" is also a decent (4th place) music video by the band. A close cousin to "Epic".

These videos should be available (retail) via the Who Cares a Lot?: The Greatest Videos DVD.

To submit ideas for Retrospective articles, or to just chat about the obscure and esoteric, contact me here.
No comments:

[I wrote this about a month ago, but delayed it because of Michael Jackson's death and the media response. It appears here unaltered.]

Eddie Murphy. Once the crown prince of standup, once a box office boon, once a successful recording artist. In a nutshell, another casualty of the 80's-90's transition. The same transition that swallowed whole the careers of stage and screen. Hair metal, Members Only jackets, Atari, California Raisins, Pee-Wee Herman, side ponytails and Eddie Murphy all became (tragic) statistics.

Teaming up with Michael Jackson in the early nineties shouldn't be a bad idea; just like teaming up with Rick James in '85. But for Eddie Murphy, the career tailspin had already begun. Yes, he's still making movies, but seriously: Boomerang, Vampire in Brooklyn, Holy Man, Pluto Nash, The Haunted Mansion, Norbit, Meet Dave. Have any of you actually seen one of those in the theaters?

The first grim error of the video is the fact that those New Jack Groove sunglasses are just annoying. I don't know if you were self-aware back in that time, but honesty muscle shirts were not that cool then. But, black denim was. He totally reminds me of my junior high geometry teacher, wife-beater or not. The green screen/blue screen was still pretty damn high tech for those days. I mean, this came out just before Jurassic Park. Michael Jackson is probably the best thing to happen to this video. He brings a comic effect, startingly. He's remarkably loose. And, no choirboy jokes!

I guess the concept is that happiness is a state of mind. I get this because Eddie starts out in grayscale, and then MJ comes in and just brightens everything up. Then the kids come in and start la-la-la-ing.

I think it's the hearts and peace signs that put this puppy over the edge... In the words of John Stewart (while on the show that permanently retired this video from the MTV airwaves, 25 Lame): "what's up with THAT?"