For my very first retrospective on a music video from yesteryear, I wanted to do something special. Maybe show a normal person something old with a twist--something rare and glorious. Maybe something that would make you say "holy wow". I searched and searched, and I think I have it. I wanted to start on the right foot. I hope it doesn't set a high bar for the rest. Michael Jackson.

John Landis, the director of arguably the best music video of the 80's ("Thriller"), was tasked again with showing Michael Jackson to the masses in 1991. He knew the pressure was on and he had to go all out. Not only was this video to simultaneously premiere on (America's) MTV and BET, but even FOX was in on the prime time action. (You may remember also seeing "Remember the Time" on CBS in primetime the next year). If you were old enough to remember, you know that MJ was an untouchable star in the late eighties and early nineties.

As for cameos, there are many. Most people could tell you that Macaulay Culkin is the featured actor, but Cheers' own George Wendt, along with Homer and Bart Simpson, Tess Harper, Peggy Lipton and even a young Tyra Banks are part of the complete package. What a motley crew! But actors are one thing--what about content?

There's a good chance you've seen the Culkin intro and the meat of the edited video at some point in your life. Basically, there are 3 parts to the edit: a fed up kid blasting his father through the roof with a loud guitar, Michael cavorting around with lots of ethnic groups/nationalities, and a morphing scene that "blends" a bunch of people's faces into one another. The main theme is racial equality and stuff. There is also a little urban rap segment, but that is really not a big deal. What is the big deal is the last segment of the long unedited version. 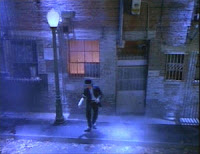 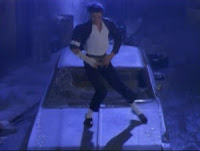 Michael begins slamdancing/tapdancing and then goes apeshit on a car and breaks the glass of a nearby store/hotel. Pantherrrrr raaaaage! After a decent amount of fan outrage (for Jackson standards), graffiti was superimposed on an altered version of the video. The windows now read "No More Wetbacks" and "Hitler Lives" (to go with the equality theme, you know). You may be able to hunt down the non-graffiti version, but it is super rare.

I think the seminal rage moment is when Michael reaches into the glass-smashed car, grabs the steering wheel and throws it at a window with the graffito "KKK Rules". The two best parts about this are: the groan when Mike throws the wheel, and the fact that some inner city artist spray-painted anything about the Ku Klux Klan. And that alone is worth the price of admission. 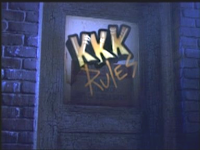 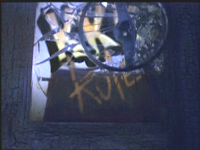 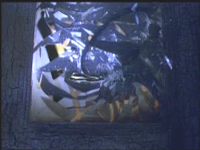 Try to watch it and think only of the video, song, and not the press surrounding the artist (you know, he's turning 51 this year, and his farewell concerts are this summer).

I do not wish to bash Michael Jackson in any way here, now or ever. He is a visionary to say the least. I envy his legendary dance skills. But, why did he need a solo dance scene at the end of an already overblown video? That is all I have to say on the subject of "Black or White". I guarantee MJ will appear a few more times before I leave the music videos to another lost soul.


[All images are © their respective owners.]
No comments:

I guess the best place to begin starts with the explosion of creativity in the mid-20th century. At one point, a performance video became a concept video. You can catch up on that on Wikipedia. My story begins with the birth of Music Television (MTV) in 1981. Music video was the greatest invention in music since the advent of sound recording. It was a whole other dimension to consume and digest, and it had a fucking channel all to itself. MTV shaped the music world. Do you think "99 Luftballoons" or gangsta rap would have had their explosiveness without the medium?

I was born two months after the station's famed launch, but that makes no difference. When I became old enough to really understand the world around me (1986), is when the experience began. A few videos from that time really define the moment for me.

"Open Your Heart" is (I think) what started to get me interested. It may seem funny, but I was drawn to this Madonna... this stripping singer of sorts. You may want to re-watch the video to see what I mean. I didn't have any hormones really running at the time, but I knew sex when I saw it. It was Madonna in her Sean Penn/hat wearing phase. Maybe I thought I was that little kid in the story. It's kinda creepy, I must say. I always remember I looked out for the ending, because the building where Madonna's peep show was going on had a big voluptuous woman on the top... with blue lights as nipples. Damn, she has some good videos.

Or maybe it was David Lee Roth's "California Girls" vid. Just an absolute spectacle of women and theatrics. Later, his "Just a Gigolo/I Ain't Got Nobody" and even "Just Like Paradise" would tattoo my brain with excessive debauchery that was the sign of the times. Good stuff.

I can also totally remember "(You Gotta) Fight for Your Right (To Party!)" as a kid, too. The Beasties jumping on the couch is iconic.

George Michael shaking his ass with a jukebox also comes to mind ("Faith").

Music Television played a huge part in my childhood and adolescence. It also left and then came back into my life. My hometown's only cable company stopped broadcasting MTV in the late 80's. They (the conservative Southern Baptist monopoly) were fed up with the Motley Crue-types drinking and banging in our living rooms. I was irate. It eventually came back on, to the point where I missed GNR and the whole grunge scene, and got backwash.... I think it was 1994 when it was "allowed" back on. Coincidentally, most of my favorite albums come from that same year.

The MTV engine grinded to a halt around 1998. The channel had recently moved from Los Angeles to New York City. Instead of invigorating ideas and videos, we got a daily dose of non-music. I can't blame the city... maybe the channel was doomed all by itself. One of the last bastions of the network's music shows, MTV Live (which mostly rocked), had devolved into TRL. This was the end of network credibility.

Now, the only music videos you see on the station are during a reality show's credits, or at 3 AM (at which time they play only 10 recent videos on repeat ad nauseum). Sigh.

At one point in college, I had the sensibility and bandwidth to start preserving the music video memories I so loved. Using mIRC, Napster clones and the like, I got a heavy dose of the classic, the obscure and the rare. I started reading music video blogs and websites, and watching at least one new video a day. I started making DVDs to watch away from my computer. About 23 GB later, my collection only has a handful of missing pieces from the days of yore. So, get ready to experience some new and old novelties!
No comments:

Email ThisBlogThis!Share to TwitterShare to FacebookShare to Pinterest
Labels: musicology

I have a special, special relationship with the art of music videos. I have a gigantic collection on my hard drive, and it's all quality.

Some of my first memories of the medium are videos by Belinda Carlisle, Beastie Boys, Van Halen and of course Weird Al. It was Music Television in its heyday, and the channel instilled a love of music and cinematography... that I cannot get on that station anymore.

I am not sure if I will be doing one video at a time, or one theme at a time or what. But, be sure you will definitely see stories about the rise and fall of MTV, directors, the legend of Madonna (and others who always understood the power of the medium) and various eclectic tracks you may have never seen before. Sometimes I may go forward, sometimes backward.

So, it's time to get down to the business and namesake of this blog... stay tuned.
No comments: