Missy Elliott with Ciara and Fatman Scoop
Director: Dave Meyers
We start off with Missy's 2005 contribution to the video pantheon. If anything defines a good R&B video, it's dance moves, weird cameos and other sillyness. "Lose Control" is just perfect for a high school pep squad... kinda like Gwen Stefani tracks but with a little less cheerleading and a fat guy... and Tommy Lee.

Prince
Director: Phil Harder
Mix up some September 11th airport paranoia with crayon-y special effects, and you've got Prince's most political track ever. Yes, that is the Whale Rider girl; and no, I don't know what the "5:5" means on Prince's forehead. Undoubtedly the best Prince video in the last 10 years. But, it barely beat out "Black Sweat"...

Silverchair
Directors: Sean Gilligan and Sarah-Jane Woulahan
Silverchair quietly made some spectacular vids in the last decade. At least 3 are in the Top 50 for me, and "Across the Night" is their best. In a time where the band was on an indefinite touring hiatus and the future was dim, this managed to keep the band alive through airwaves. I didn't even realize it was in grayscale until a second viewing. It took me about 20 views to realize that was Guy Pearce, too.

A decade ends. Ten years of joy (blogging), grief (politics), and mostly apathy (YouTube). To commemorate the death of the 2Ks, I am covering the best fifteen music videos to grace the planet since December 31, 1999. Narrowing it down to 15 was hard--a test of will. There are no Kanye or Weezer videos; no "Trapped in the Closet". This is serious time. This is a top 15 list... Get inspired, learn and enjoy!

Email ThisBlogThis!Share to TwitterShare to FacebookShare to Pinterest
Labels: best of the decade

I have been listening to Chinese Democracy's "Street of Dreams" for about two weeks straight, every day. I cannot figure out if the opening lyrics are actually Axl Rose's voice or a pitch corrector, auto-tuning his pipes to those lows and highs. The first time I heard it, I assumed the latter. A decade's worth of fine-tuning CD would make anyone believe Rose was perfecting every syllable from his throat. Concerts were cancelled because of laryngitis/illness in the past, and it always seemed that Axl was straining to sound immaculate (especially on old songs). But now, I am not so convinced. He could be that good after the first or the millionth take... 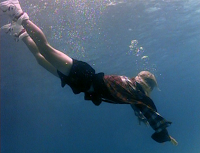 There is no other rock star I can think of that defined a generation better than Axl Rose. When I look back at grade school, every boy envied the man. Rose set such a high bar: he beat his wife, incited riots, idolized Charles Manson and looked good in a kilt. He feuded with Kurt Cobain and Vince Neil. Nothing could touch him, except maybe supermodels. The only thing that could hurt W. Axl Rose was himself. And, that's exactly what rings true today on "Estranged".

I just completed Chuck Klosterman's Fargo Rock City. It is a retelling of 80s "metal" and touches on some great moments in video history. I guess I had forgotten that GNR had a video trilogy back in the early 90s to promote Use Your Illusion I & II. I figured they were separate entities (especially the "November Rain" clip, as it was based on a short story). And, like "November Rain", in "Estranged" (the final act) there is a lot of water here. A lot... 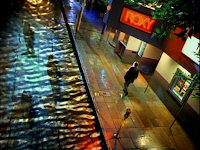 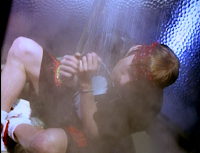 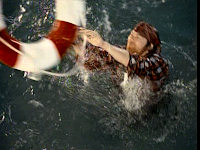 This video is a chronological mess, but it is all magical. It can be best summed up by:
There is too much to discuss here! First, bottlenose dolphins... Remember that dolphin craze (or was that just me)? If you are a dolphin fan, then this is your Mecca. Porpoises are on televisions, coming out of billboards, swimming in CGI rivers, in cargo planes and even on hood ornaments. The only thing preventing this notion from being overkill is 9 minutes of other good stuff. 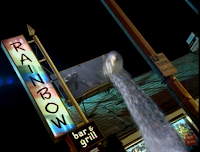 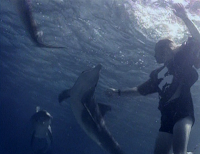 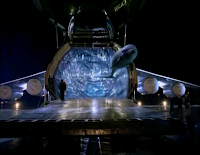 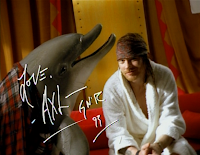 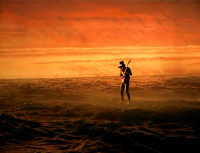 Slash's second solo is the best guitar part expressed through video ever. Slash rises from the sea, only to shred a Les Paul while walking on water. The color of the guitar and sunset even match.

The rest of the video is hard to describe, and the screen captures hardly do it justice. Tons of "money shots" all throughout: Axl-esque poses throughout, slow-motion Slash, hot chicks... what else is there to want?

Oh, and the budget... One must remember the Waterworld Rule: any film with water scenes has an insane price tag. However, here is where the internet fails. I have searched and searched to find how much this video cost. No satisfaction! 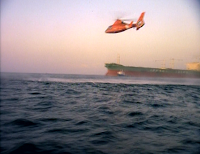 "Estranged" is one of those videos that is overshadowed by an even bigger one, and pre-web days just really blow my chances of ever finding a cost without sifting through microfilm.

I distinctly remember (via an MTV special back in the day) the oil tanker costing $1 million for a day's rental. Combine that with dolphins, Coast Guard and water CGI, and logic dictates it's above the $3 million mark.

The GNR legacy, to me, lies in videos. As soon as I heard Welcome to the Videos existed, I plunked down $15.00. Almost every video shows concert footage, and captures the band at its zenith.
There is still rumored to be a "Better" video, which will be the first visual in over a decade from the "band". But, it will never capture the post-80s turmoil and bombast of Slash, Izzy, Sorum and all the other fired members.

There is much more to write... Stephanie Seymour, etc... but I'm tired. 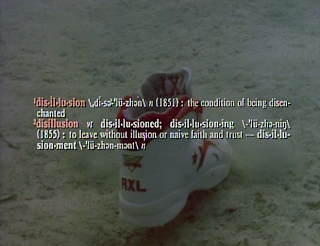 
To submit ideas for Retrospective articles, or to just chat about the obscure and esoteric, contact me here.


[All images are © their respective owners.]

Of all the West Coast rappers, Snoop Doggy Dogg always seemed to be most preoccupied with the opposite sex. Sure, he liked money and mayhem, but romantic involvement pervades the catalog... more so than Dre ("Bitches Ain't Shit"), Ice Cube ("Get Off My Dick and Tell Yo Bitch to Come Here") and the others. Inexplicably for a rap artist, Snoop was monogamous for the brunt of his fame (in fact, he married his high school sweetheart). Snoop tried to give up marijuana, but never once did he swear off sexual seduction.

Snoop Dogg has had a very long-lasting career (maybe because he was a lover and not a fighter?). But in 1993, he was just another dog. Literally. "Who Am I (What's My Name)?" has quite a poignant video. 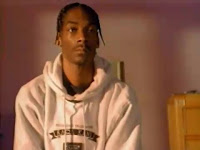 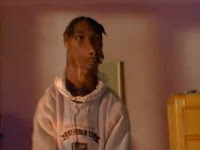 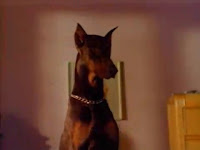 I, like most people, enjoy anthropomorphism. I think it's a little abusive, but it definitely isn't cats boxing to the death. Rottweilers with sunglasses and Dobermans throwing dice are adorable. This may be the cutest gangsta rap video ever.

The only storyline here is the "Doggs" avoid capture by Animal Control. (Notice the dog catchers' hats are on sideways, denoting their incompetence.) They break up picnics and just run around. And, when the dog catchers come into the bar, they morph back into humans to avoid kennel time. 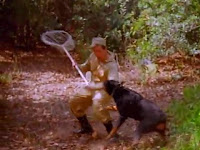 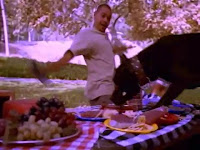 There is a definite shout-out to Dogs Playing Poker going on here (the artwork is even in the background a few times). And, the video doesn't explain if the people are actually dogs-in-disguise, or humans-in-disguise. They were rolling dice and dancing as dogs, so they must have been really comfortable as canines. These are the things I dissect. 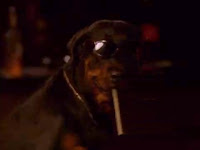 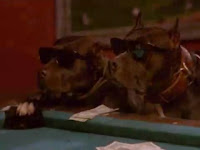 TV Funhouse was one of the funniest Comedy Central shows, and you have to wonder if Triumph was inspired a little bit by this video. No shapeshifting going on there, though. 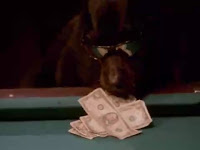 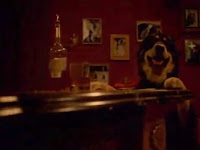 And now... an obligatory animated GIF.

[All images are © their respective owners.]
No comments: